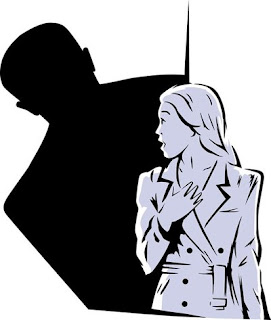 I was out with a bunch of women today. Having lunch. Tossing around ideas about seniors and poverty and challenges of women raising children not thinking about their future finances. Etcetera.

And then the talk turned unexpectedly - as it can - to "stalking" by men.

And unsurprisingly all of us had been stalked.

(And coincidentally, I am reading a book about stalking in Northern Ireland called "Milkman". Recommend.....anyway.)

So we shared stalking stories.

And no, they're not funny. They are alarming. And ugly. And terrifying. And can be fatal as we all know.

So one of the younger women shared an experience she had with Cabin John, this guy who had lived in the city and then moved out to live permanently in his cabin. Cabins here are not what you would think they are. They are often better than the houses in the city and quite lavish.

On some pretext he had gotten her cell number and then proceeded to text her suggestive messages. Telling her of dreaming about her, sending her heart emoticons, he couldn't stop thinking about her. This was all around 5 years ago.

So she checked him out on Facebook and lo and behold she found him. And his wife. Happily grinning at each other. So she told him never to contact her again or she'd call the police.

A few of the other women nodded, word had gotten around about Cabin John, pervy, older, short, fat, unattractive, they said.

Why don't I know him? I asked - I used to live in that town!

I saw you having coffee with him a few weeks ago, one said.

What? I asked, you can't be serious!

And then the penny dropped.

My dear friend John. He and his wife are friends of many, many years.

And I felt sick to my stomach. I had seen him only a few days before.

And I was still numb with shock hours later.

I have no interest in ever seeing him again. Ever.

We just never know the dark secrets of others' souls, do we? I feel enormous loss, and anger, and absolute disgust. And fooled. We have shared much over the years and now I question all of that too, his basic dishonesty. One thing about him had alerted me though. He had always protested when men were called out on bad behaviour and bleat "not all men" and I've known deep down that that is a sure sign of predation. All decent men call out predators too and support women. And some of his FB posts were sorta anti-women, kinda sexual. And then one time he had threatened his wife in front of me. ("I will kill you if you ever fool around on me!") and I put it down to unfunny, jokey "teasing". Amazing what we can overlook, I feel guilty about that. Crazy woman-guilt based on nothing.

But I know him now for who he is and it is ugly. And part of me is brokenhearted at my own gullibility and previous bemused tolerance, and the loss of what I thought would be a long term friendship.

Names are changed to protect the guilty.

Posted by Wisewebwoman at 10:31 AM