I don't think I've ever fallen into the trap of following hair trends. Mainly I've had mine long with the odd excursion into sort of short but never all the way there as stylists were always appalled when I thought I could pull off a Helen Mirren. 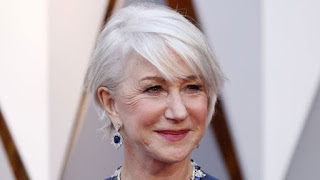 Large it is, I can never find a hat to fit it. Stopped trying a long time ago.

I think it all depends on whether you're a hair off the face person or not.

I find that many men get very sensitive about hair as they age. The increasing absence of it.

Here I am around 16. Not much has changed in my preferred hairstyle in sixty years. Up or down, it's long. 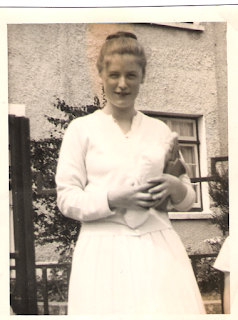 I've always had super thick hair (enough for two heads, one of my aunts put it) but it did start to thin out a few years ago and I realized that all the complaining about it when younger had put a jinx on it and now I, too, was going bald. So I had utmost sympathy for the above mentioned balding men. I was now in their club, so to speak.

Well, I didn't go bald. But alarmed I was and someone said up your vitamin E intake which I did and it stopped the hair loss.

So then I started to regrow it in earnest. Mainly because I know this woman who has this marvelous white/grey messy pigtail down her back and I wanted to be like her when I grew up even though she was 10 years younger than me. My hair will never be that lovely silvery thing. It has always looked like a bad dye job. And I haven't dyed mine in oh, say 30 years. Right now it is silvery/grey/brown on my head and then further down, a nice shiny brown. I tie it back right now and it cascades nicely (I think) but I don't ever see the back of me as I walk around so they all could be pointing and laughing and mocking and I wouldn't know, would I.

While my hope would be for it to be like this: 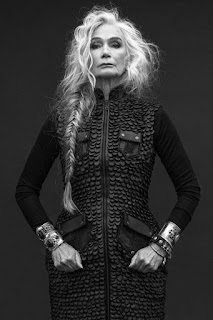 So hair - men and women alike. How do you accommodate aging hair. Chop it all off? Polish your expanding pate? Let it grow? Spend lots and lots on crimping and dying and blonding? Grieve your younger hair?

PS And just for the hell of it, here's a treat.

Posted by Wisewebwoman at 9:11 PM