We're all so terribly brave, aren't we?

Like we have no idea where we're all going and we march on. Or stumble. Or fumble. There is no light at the end of this particular tunnel. At least not yet. And I hope fervently that we will not repeat The Great Flu of 1918 where millions upon millions died and it appears that many do not learn from the protocols they put in place even then, over 100 years ago. Contagion is contagion is contagion. 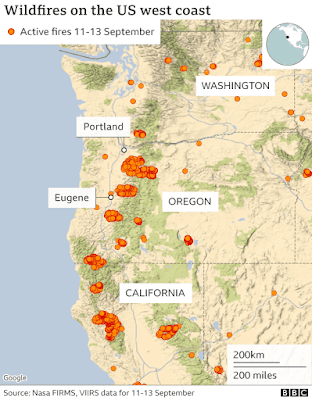 The toll on fire and emergency services on the western seaboard of the US to counteract this cataclysmic burning must take a huge toll along with the risk of Covid to all concerned. Bravery indeed.


I'm avoiding the US news as if it were another form of plague on the landscape but sometimes it is unavoidable. A horror of a genocide with nearly 250,000 citizens now dead. My friends who live there and also hold Canadian citizenship have made arrangements to move back to Canada in November. Constant sunshine for them has a high price. And then the fires. Flames and pestilence at the same time. It crushes the brain. This was yesterday's Covid statistics for the top countries cases on the planet. With the US staggeringly ahead. 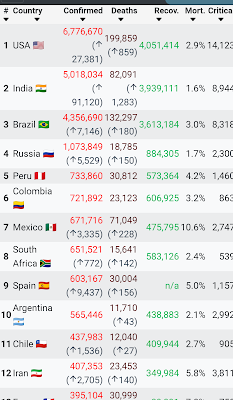 Here we are catching (in isolation) each case as it lands and thus preventing community spread. The 4 Atlantic provinces (New Brunswick, Nova Scotia, Prince Edward Island, Newfoundland & Labrador) are in the same bubble, with provincial border checks for those coming in from outside these provinces.

St. Pierre and Miquelon, tiny islands off the coast of Newfoundland which is French territory, is not faring so well. 11 cases in their tiny population of 6,000.

The rest of Canada isn't faring so well at the moment. 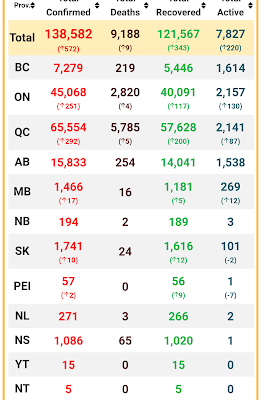 We're all tapping into our depleting stockpiles of bravery these days. Even if it's just shutting our eyes and going wah-wah and not contemplating a future that has no shape whatsoever.

Posted by Wisewebwoman at 12:50 PM