Wednesday Whispers From the Past 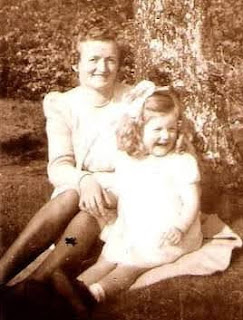 I offer you this.

I am curious about the man behind the camera. He's far from being a man of means.. He is the husband of the woman shown and the father of the child.  They live in a small flat above a chemist's on the main street of a small town. He's the town clerk.

He feels it important to capture the moments in his family's life so (I imagine) he bought the camera at a discount from the chemist shop downstairs, where he gets his photos developed. It's a Kodak Brownie.

Their picnic is in the basket of his wife's bicycle. She doesn't want the child sitting on the bare cast iron seat so she uses the child's baby blanket on top of it to make sure she's comfortable. And they then sit on this for the picnic.

They're all a little tousled after the cycling. The mother has rigorously curled her own hair and that of the child the night before. And as the father readies the lens on the Brownie, she takes out a comb and fixes her own hair but devotes more time to the child who squirms as she reties the bow in her hair.

The father jokes with the child to make her laugh and as she does, the mother smiles, holding her daughter's hand.

Posted by Wisewebwoman at 8:48 PM