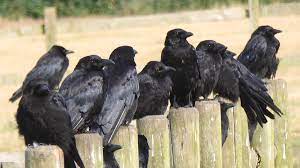 I like that they scream at me if I leave my building on my way to the car when I don't have any food for them that particular day. I have no idea how they sense it's me in my brief hike of ten steps from the door to the handicapped spot as I unlock the car door. But they assemble, waiting. Patient. A little frightening. No wonder their collective noun is a murder of crows. They sound as if they could like to murder me. Above me, they gossip in their language. Chastising, berating. Reminding me to buy the bag of peanuts. When I do distribute their preferred food choice they (I like to think) drop a fir cone near my car. A gift, an encouragement. An odd white feather (a murdered gull?) another day.

I have a few crow stories.

And yes, I love them, their intelligence, their fearless behaviour on streets and parking lots, eyeing cars, dodging them, their massive assembly at night before they take off to various rookeries. The way they quickly learned to imitate the gulls in front of my house by catching oysters and mussels and dropping them from great heights onto the rocks to break them open.

Posted by Wisewebwoman at 11:05 AM