I've been struggling a bit with health challenges - mainly, and sadly, much pain, some of it completely baffling me. I couldn't even lie down yesterday, I had to sleep in my recliner.

I talked to other elders today about the pain we know and the unexpected pains we get which seem unrelated to medication shifts.

The two of them produced evidence of similar episodes which vanish after a couple of days.

I've never seen it written about before. Aging body ambulation's suddenly seizing and flattening with surprising outbursts of unexpected aches and near immobility. Some so severe that walking is impossible, along with, like myself yesterday, not allowing even a lying down.

Living with the unfamiliar.

Today is better, the mysterious crippling lurch not as severe.

I am managing a pile of editing today as we have a deadline for June 30th for The Big Finito for publishing the latest anthology sometime in July.

I am playing Bach on one of those five hours streams which fills me with gratitude. And a kind of reluctant joy.

Iceberg Season is here and here is one pic from yesterday. 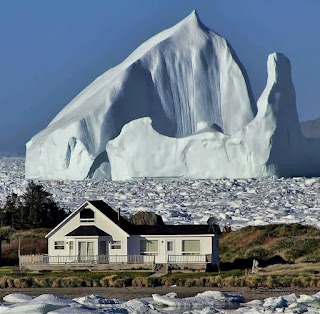 And this is right by where I live, a village right in the City of St. John's by the name of Qidi Vidi - photo courtesy of Jonathan Cooper. Fog can be a glorious sight. 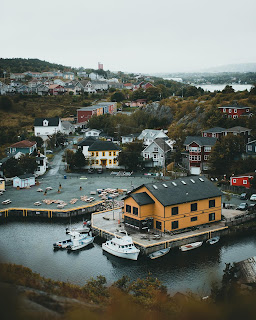 Posted by Wisewebwoman at 4:24 PM