Living in Canada, as one wag put it, is like living with a meth head as a tenant in your basement. A tenant who is so out of touch with reality that he keeps screaming in your face at every opportunity that he is the best tenant ever and he has all these friends who will tell you the same thing.

Followed by Denmark, Sweden, Norway. and way down the list at #20, is the USA.

And then you get healthcare. The U.S. healthcare system only extends to those with money. Lots of it. If you are barely surviving economically, serious health issues can result in bankruptcy.

"Medical bills are reported to be the number-one cause of U.S. bankruptcies. One study has claimed that 62.1% of bankruptcies were Caused by medical issues.  Another claims that over two million people are adversely affected by their medical expenses."

The U.S. ranks last overall on the health care outcomes domain (Exhibit 1). On nine of the 10 component measures, U.S. performance is lowest among the countries (Appendix 8), including having the highest infant mortality rate (5.7 deaths per 1,000 live births) and lowest life expectancy at age 60 (23.1 years).

Best healthcare systems in the world are:

And gun deaths, so far  in the US in 2022. Those red dots? Use your imagination. 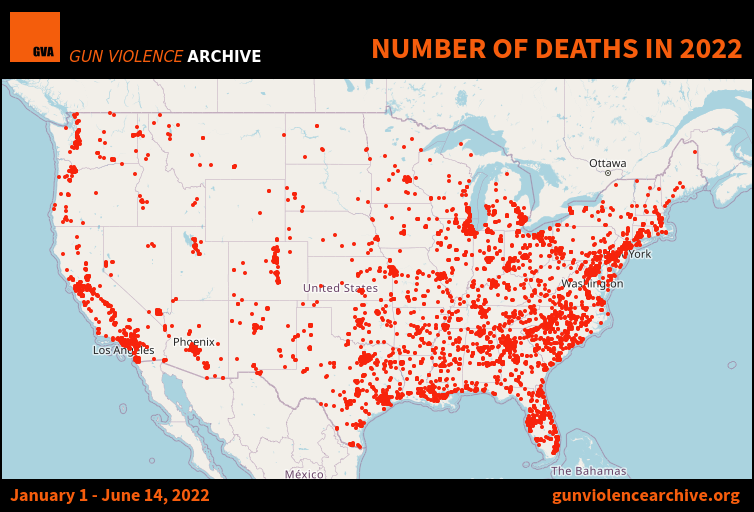 And then we have this travel advisory/warning from the Canadian government on going to the USA, as if one is entering a "third world" country:

The rate of firearm possession in the US is high. It’s legal in many states for US citizens to openly carry firearms in public.

Incidences of mass shootings occur, resulting most often in casualties. Although tourists are rarely involved, there is a risk of being in the wrong place at the wrong time.

Familiarize yourself on how to respond to an active shooter situation."

No other country in the world shoots its children in schools as they hide under desks. And the solution? Arm teachers, reduce number of doors to schools.

The louder one screams about being the very best, the greater the lie.

Posted by Wisewebwoman at 10:42 AM