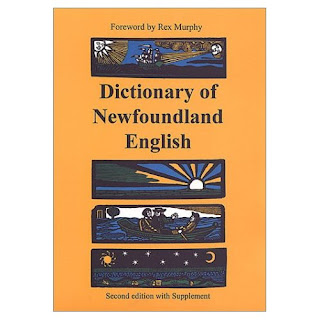 "The Dictionary of Newfoundland English" is a massive tome, 770 pages plus a forward. And I read it like a novel. Many words have the scent of Ireland about them, words of my grandparents and particularly the words of my great-grandmother who was a cranky old wan, disliked by many, but kind to me. "I only have room for the one," she said to my grandmother and her daughters, "Just the one great-grand one!" and she pointed to me and that was it. She refused to have the other great grandchildren around her.

She made a bit of an effort with me. She'd call me her "angashore", not quite the equivalent of "dotey pet" which was used by my Granny. Angashore might have been a bit of a step down from dotey pet but coming from the Great and Fearful Nana S., this was a total endearment. Angashore: a weak little thing, a thing to be pitied, coddled, protected and fed, in a correct translation for that era.

Newfoundlanders have made of the word their very own.
Here, in the dictionary we get:
Angashore, Angyshore
(1) A poverty stricken creature
(2) A weak, sickly person, an unlucky person deserving pity.
(3) A man regarded as too lazy to fish.
(4) An idle, mischievous child or person.
(5) A migratory fisherman from Newfoundland who conducts a summer fishery from a fixed station on the coast of Labrador.

In the tradition of Gaeilge, the Irish language, words beginning with vowels were aspirated (an h put in front) when used in complex sentences. Angashore was packed on board the fishing boats leaving from Wexford and Cork sailing for the new found land, along with the bait, hooks, nets and lines way back in the seventeenth century.

And it emerged at the other side of the Atlantic, sometimes, as "hangashore", thus the new definition in (5) above. A stationary fisherman: "hang a shore".

I just love the evolution of language and I particularly like the special connection for me in this one gorgeous word.
Posted by Wisewebwoman at 8:33 PM