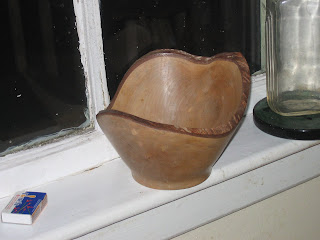 Picture is of a bowl made out of local wood by my friend, "G.C."

It hit me again last night as I was driving home from meeting friends. As it has hit me many, many times over the years. The reality of worry.

A worry had been perking all the way through our many cups of coffee, stealing my presence throughout much of the night.

Why, sez I to myself do I let this happen? Let a stupid thing like a blocked up toilet in my bathroom at home interfere with a nice evening out?

And then, next thought, when has a worry actually actualized itself, inserted itself into reality?
When?
And I laughed out loud as I drove.
And came home. And got the plunger out again and rammed that sucker into the toilet and next thing, it flushes. Duh.
What makes me this way?
Well, the last time the toilet got blocked my genius of a handyman was out at the fish for a week and unavailable and I couldn’t get anyone to fix the toilet (nobody from the nearby town would drive out) until I dragged myself literally into the publicity of the local shop and bawled my question out loud after four days of using a bucket.

“Anyone here can fix a toilet? It’s really, really badly blocked!!” When I’m whipped and beaten and down for the count I lose all pride. I become shameless. Not a bad thing.

Well, the town drunk who is a you-have-to-be-desperate-to-hire-me kind of fellow volunteered. And he sorted me out. Early in the day before the fairies took him. He had to take the whole thing off the floor. What some people do for a living - or a bottle - has me in awe. I mean I used to gag changing my babies’ nappies. I tipped him well for his efforts. And knew who to call the next time. At his mother's. He's 55. Doesn't believe in wasting money on a phone when he can use his mother's. He doesn't live there. She has ways of getting hold of him. She even lets him borrow her truck if he has housecalls like mine. But I was sorted. No worries.

No matter what, I get taken care of. Time and time again. Septics, wells, wiring shite, no firewood and no chainsaw, no backdoor. It all gets taken care of.

So why, why, why do I worry about insane stuff?? Stuff that has no intention of ever happening?

Like my gentleman caller. I worried for a while he would make some kind of move on me. I haven’t the slightest shred of attraction to him (maybe the way R felt about me, there’s a thought!). So sometimes I avoided him. All for the worry of losing his friendship when I was forced to reject him. Jaybuzz, the insides of my brain frighten even me.

Well, in the last few weeks, I’ve helped him a few times with his computer issues and he gave me one of his beautiful hand crafted bowls (picture above, taken a few minutes ago), a loaf of his home baked bread and told me he is very much open to having a friend like me and he’d like to cook me dinner and talk some more and play a spot of cribbage, maybe. I do not feel threatened in any way. We have the most interesting conversations (ship wrecks, WW1, artistry, words, poetry, paintings, aging) and never once has he even touched me.
Worry.
Never happens.
Posted by Wisewebwoman at 4:59 PM