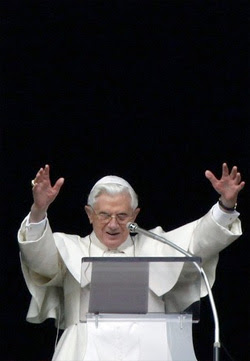 Yes, that's the amount the beyond-broke British taxpayer will be paying for a visit from Himself-The-Holy so that he can utter these immortal words created especially for those who live within the 'natural law'.

"In a speech in which he confirmed that he will be coming to Britain on a four-day visit in September, the Pope said: “Your country is well known for its firm commitment to equality of opportunity for all members of society. Yet as you have rightly pointed out, the effect of some of the legislation designed to achieve this goal has been to impose unjust limitations on the freedom of religious communities to act in accordance with their beliefs. In some respects it actually violates the natural law upon which the equality of all human beings is grounded and by which it is guaranteed.”

Excluding gays and women of course in that equality nonsense, not being part of what's natural and stuff. I hadn't realized that paedophiles are part of the Natural Law Club.

Let's hear it once again for hate, prejudice and exclusion, shall we?

Some days I get suspended between LOLing and SOBing.
Posted by Wisewebwoman at 7:38 PM