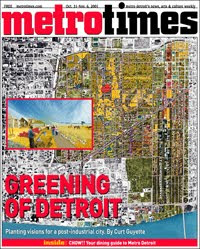 I think we need to be brought to our knees to make any beneficial changes in our lives.

I can write until I'm blue in the face about sustainability and green living and reducing, reusing, re-purposing and recycling. And trust me I do in other publications. I could bore for Canada on that topic alone.

I recycle, I make little herb pots out of my used cans. I compost faithfully. I plant vegetables. I use sustainable wood from my own woodlot to heat my house and for most of my cooking. I have green laundry equipment. All my bed linens are other people's discards as they climb the ladders of thread counts and matching huzzahs in their bedrooms. Come to think of it, most of my clothes are kindnesses donated by a friend. I don't pollute what's left of my brain with the toxic fumes of television pimping products I don't need for a house I would never desire. I make sure none of my clothes are walking billboards hawking the Chinese production line products of Gap and Garage et al. I avoid Walmart and its competitors like the viral plague on the landscape that they are and my cellphone is about 5 years old.

Am I virtuous? Absolutely not. I don't do all this out of virtue. I could afford 800 count sheets in creamy Egyptian cottons. And I could replace my micro Toyota with an SUV. I take a bag and plastic gloves and regularly clean up the 2 kilometres of beach in front of my house. And one day I will take a picture and itemize all the discarded rubbish of the contemptible litterbugs who pollute this pristine place without thought. But I think about it and do something rather than stew and fume. I am no saint. This little part of the planet is on loan to me from my granddaughter and her granddaughter.

My friend Twilight over at her Learning Curve on the Ecliptic Blog dug deep for some great quotes on Earth Day and I repeat a few of them here:

I really wonder what gives us the right to
wreck this poor planet of ours."
Kurt Vonnegut Jr.

And Man created the plastic bag and the tin and aluminum can and the cellophane wrapper and the paper plate, and this was good because Man could then take his automobile and buy all his food in one place and He could save that which was good to eat in the refrigerator and throw away that which had no further use. And soon the earth was covered with plastic bags and aluminum cans and paper plates and disposable bottles and there was nowhere to sit down or walk, and Man shook his head and cried: "Look at this Godawful mess." ~Art Buchwald, 1970

The sun, the moon and the stars would have disappeared long ago... had they happened to be within the reach of predatory human hands. ~Havelock Ellis, The Dance of Life, 1923

And then I read about a place that has been brought to its knees: Motor City – Detroit.

And Detroit, in its economic pain and devastation, is re-inventing itself as the Ground Zero of the sustainability movement with a complete green revitalization strategy. And here's the big thing: social justice is at its very core.

With the city’s current leadership hypnotized by what they see as a civic death spiral, new leadership is coming from the place it always does in the end–from the bottom up. This new life cycle is a grassroots affair with an astonishing number of people fashioning solutions and affirming. There are now eight hundred community gardens on abandoned lots, peace zones for public safety, green retrofitting of empty houses, new open source media projects and an exploding hip hop and poetry scene.

This June, as many as 10,000 people from around the world will be convening in Detroit for the US Social Forum. They are organizing around the statement: “Another Detroit is Happening.” and have chosen the city because it is ground zero in today’s global financial meltdown.

This, above anything else I've read, gives me the greatest hope for the future.

Pass the kneepads.
Posted by Wisewebwoman at 12:14 AM