Car Mechanic of the Century - only in Newfoundland? 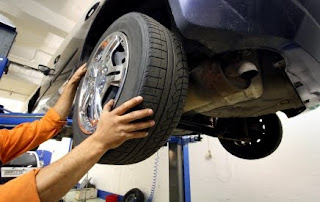 So I take my car to my fairly new (to me) mechanic first thing in the morning so he can assess the damage to my rim and tire.

The tire is hopeless - the sides are shredded. But he thinks he can hammer out the rim. Come back later in the afternoon.

Which I do. There were no tires in stock at his supplier so he drove to a Canadian Tire and picked one up, a good one. Cost him $64.95 plus tax and he shows me the bill.

And yes, it took a while but he was able to beat out the rim with a rubber hammer and it was as good as new.

So he installs the new tire and refurbished rim and tells me I'd lost the hubcap in the blowout but he would poke around the shed out back there and find me one, don't go out now and buy one, just drop by the next time you're passing and I'll have one for you. Free.

So he goes to his laptop and fiddles around and produces a bill for $80.00.

Too much? he asks.

Far too little, I say.

Well I charged you $3.00 for the disposal fee for the old tire and the taxes and the cost of the new tire so that comes to $80 in my reckoning.

No, you forgot the labour - you had to beat out the old rim and install the new tire and run around downtown to find a new tire plus your own mileage on top of that....

Ah no! I'm not charging you for any of that. You had enough stress with that blowout!

Oh it is, it is! I can't take advantage of anyone's trouble. That's not my way of doing things, b'y.
Posted by Wisewebwoman at 12:24 PM