More Entertainment from the Vatican Vanities 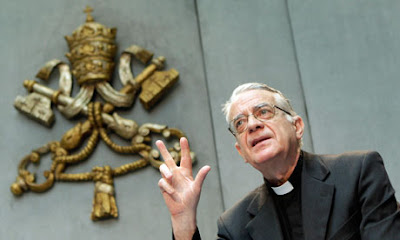 So now we have a further episode of women hatred from this sorry bunch of barnacle encrusted old patriarchs aka Roman Catholic Hierarchy.

They have now classified even an attempted ordination of a woman as equivalent to paedophilia and child rape along with the usual heresy charges (what ever that is - perhaps having the gall to break free of the brain-washing cult?) Yes, lump these women in with the thousands upon thousands of predatory paedophiles who destroyed countless children's lives!

But they are certainly clear on the fact that paedophiles are a cut far, far above females, being as they are still ordained and not ex-communicated.

This comes right on the heels of the announcement from the Church of England that they would be consecrating female bishops to bring C of E into full equality.

Perhaps they're hoping to catch the onslaught of exits by the misogynists of C of E?

What a perfectly vile institution it is. How any female can be a supporter of such hatred and contempt is beyond my reasoning capacity.
Posted by Wisewebwoman at 6:16 PM