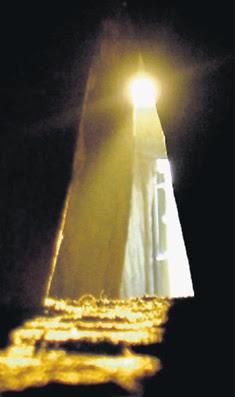 If there is any place else I'd rather be in the world tomorrow it is at Newgrange in Ireland. The light of the sun and the moon will appear in the chamber together for the first time in the 5,200 years since it was built. Yes, Newgrange is older than the pyramids of Egypt and if you haven't visited there, you must. It is one of those places that stays with you forever.

For the first time in 450 years the sun will flood through the chambers at Newgrange as the moon passes out of a rare total lunar eclipse.

Astronomer Prof Tom Ray of the Dublin Institute for Advanced Studies told the Irish Times that the last time the Winter Solstice and a full lunar eclipse coincided the Tudors were in power in England.

What is even most magical is that the light from the sun and moon will appear in the chamber at Newgrange together.

Prof Ray said “That will happen at exactly eight minutes to nine. The two happen to coincide to within a minute.”

Newgrange was built 5,200 years ago making them older that the Pyramids in Egypt. Prof Ray said this is the first time moon and sun light would have entered Newgrange’s chambers together since the monument was built.

The Irish Times questioned him as to whether this could have some special significance or messages. He said “I don’t do astrology”.

Hundreds will travel to Meath tomorrow to see the solstice event at Newgrange but only a handful, chosen by lottery, will be in the chamber at sunrise. The light enters the chamber due to very fine alignment, through a shoebox-sized gap about the entrance.

Total lunar eclipses are not very rare but only occur every couple of year. Astronomy Ireland Association said the next will not be visible in Ireland until 2015.

Astronomy Ireland have explained the lunar eclipse as follows: “Just before sunrise on the Winter Solstice 2010, a Full Moon will turn red as it rests just above the western horizon. This event is known as a total lunar eclipse, as the Moon will move into Earth’s shadow. From 6:32am, you will be able to see the Moon gradually get darker as Earth’s shadow is cast upon it, and at 7:40am the Moon will have entered totality

And a happy, magical Solstice to all you pagans out there!
Posted by Wisewebwoman at 9:30 PM