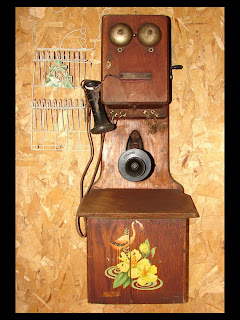 Talking on the phone isn't something I'm fond of. I'm very selective as to who I enjoy talking with and there aren't many.

I don't know why that is. I love talking to Daughter and a few dear friends in Ontario, and some here but there are far few calls where the old blue-tooth is stuck on the head and I walk around and do chores, etc., while the conversation stimulates me incredibly.  Often for several hours.

Other conversations drag, I don't know why. Maybe they're about others rather than ideas. I know - it's me. I'm getting more lodged into eccentricity as I age. And getting more unapologetic about it.

I've got one of those systems where the phone announces who's calling. The dog hates this. She whines pitifully at the automated ladyvoice and comes closer to a howl than I've ever heard her. I sometimes join her. We bond as the unwanted or intrusive call falls into voicemail.

I have to be in the mood for certain people. They seem to always want something. So I have to be in a giving mode. And often I'm on leftovers with nothing on offer.

The other day I was arranging a meeting and dialled a wrong number. Of a woman I've met the odd time. The outer edge of my acquaintance circle. She was so excited that I'd called. She told me her face must have lit up the room when she saw my number on screen, it was an honour and a pleasure to hear my voice. I told her the truth. She was a wrong number. But she didn't care.