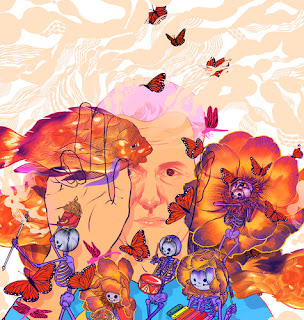 There are certain things I've never talked about for fear of, you know, the fellahs in the white uniforms thundering into the house, a strait jacket at the ready. Well, with the exception of a trusted very, very few who've admitted the same kind of thing to me and we've nodded sagely, grimaced, grinned sheepishly and vowed never to talk about it again.

And of course it's no longer private because it's here in black and white.

I was remembering my frequent childhood one. I'd be lying on my stomach in bed and I would be on a tobaggan. A magical one.  It would slide down a mountainside and then sail off over the ocean, over boats, lighthouses, birds, icebergs, desert islands. All in living colour. It was utterly marvellous.

And an adult one. Of driving on the 401 in Toronto and suddenly being overshadowed by an enormous silver disk in the sky, its humming hurting my ears, its menace terrifying me. I don't know how long this lasted. I felt suspended in another universe and the feeling of knowing everything there was to know about every single galaxy. When I came back to reality - as I say I don't know how long I was "out" - I felt weird for several days, as if my body had lost the run of itself and my mind was fragmented.  No alcohol or drugs involved.

Dr. Oliver Sacks , he of "Awakenings" et al, has now normalized all of this in an article published yesterday in the New York Times. See excerpt:

In other cultures, hallucinations have been regarded as gifts from the gods or the Muses, but in modern times they seem to carry an ominous significance in the public (and also the medical) mind, as portents of severe mental or neurological disorders. Having hallucinations is a fearful secret for many people — millions of people — never to be mentioned, hardly to be acknowledged to oneself, and yet far from uncommon. The vast majority are benign — and, indeed, in many circumstances, perfectly normal. Most of us have experienced them from time to time, during a fever or with the sensory monotony of a desert or empty road, or sometimes, seemingly, out of the blue.

Read the rest of the article here.

I am so relieved to know I'm not certifiable after all.