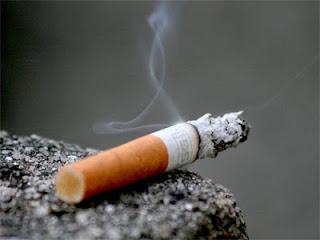 Try as I might, I can't stop the only mental picture I have of my good friend David who slipped the surly bonds on Wednesday night.

It's not a good image. It's an image of him curled around a cigarette, outside buildings, on porches, sliding into his car. Banished to the outside of life, white stick in hand, smoke curling around his yellow face. Always standing at a distance, sucking in lungfuls of carcinogens. His hugs had the deep, invasive pall of nicotine. Enough to make one gag, enough to make one cough to cover up the gag. His skin showed it. His clothes wept it. His death exalts it to a sacrament.

"Begone," I would scream at my not insignificant habit, "You effing white little tube, you do NOT own me anymore." This, along with other mantras and behaviour changes helped me kick it to the curb. Twenty five years ago now. I was seeing too much death from it then. Still do.

I didn't sleep last night. Too much leakage out of the memory bank. Too much what ifs.

If you're a smoker out there, stop. Stop! If I can, with my forty-a-day habit, anyone can.

His death was agony.

Chalk another one up to Rothman's.
Posted by Wisewebwoman at 1:28 PM