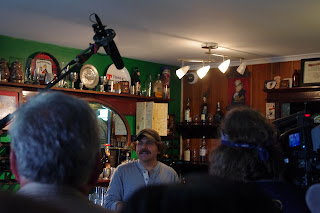 So I get to the rehearsal today for the Debut of the Seanachie (she appears next Saturday night).

"What are all these film crews and cameras and lights doing?" I ask, shocked.

"Oh, didn't we tell you? Oops, sorry! The History Channel is here doing a documentary on the area. So, if you don't mind, could you sign a release form and then chat up your show next weekend. And your new play if you like as that's about the end of a way of life in an outport, so all part of the history, right?"

Feeling oh, so glad I'd put on some non-jeansy type clothes and dabbed a spot of powder on the gleaming nose, and sorted out my hair before I arrived. Luck of the Irish as some calls it.

So we test the stage and head for the bar where the interview happens and I get such a strong feeling as I talk that a family member is present in spirit, a really strong feeling along with "He would really love this, it's like an Irish snug-in-a-pub even with all the lights and the action and crew everywhere."

And we wind it up. And it's all good.

And I drop in on a really good friend on the way home afterwards to tell her and she laughs and says, "They followed me as myself and a crew cleaned up the old graveyard earlier on today and I was able to tell them about the old gravestones -they're talking of a series in this area."

And I say "Yeah, they want to film some of our play rehearsals too."

And we're quite gobsmacked over dinner and can't stop grinning at each other (she's the executive producer of our theatre company). And sqweeing in disbelief. She had a feeling I'd show up so she threw my name into the pot of heavenly slow-cooking beef stew earlier in the day.

And I came home and swear to gawd, the brother I'd been thinking so intensely about was on the phone from Ireland and said to me: "I've had such strong thoughts about you today. Like you were here. And then I said to myself I've got this big birthday coming up in the autumn and the biggest present I can give myself is my sister here for it."

And then we talked for nearly three hours.

Posted by Wisewebwoman at 10:42 PM