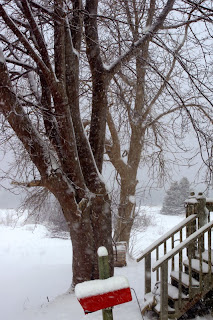 Somewhere along the way, winter, most often embraced, the odd time humorously tolerated, sometimes escaped from, became an abscess on the arse this year.

Normally, the photo above, taken yesterday, would enchant me.

But the grey blurry line beyond the trees? Yeah, that's the snow/ice covered bay. Seriously.

But they don't. And there's the rub.

It all melts into a puddle within a day or two. The puddle ices up. Then yer freezing rain falls on top of that.

And then the snow piles on again.

And then 100k/hour gale force winds howl around tearing the snow and running it into six foot drifts. And the temperature drops to minus double digit Celsius.

And these endless cycles repeated ad nauseum from November on through to now.

Every journey planned has to be plotted out carefully in conjunction with forecasts. One could get dangerously trapped in a blizzard/sleet/wind storm. Or worse yet, black ice.

Posted by Wisewebwoman at 11:00 PM