Black and White and Denial All Over - Part 5 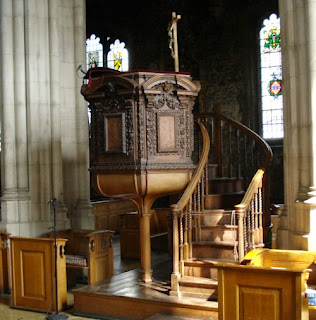 
I'm now going to get personal on how the abusive nature of all this patriarchal priestarchy has affected me and my entire life.

BTW - Priestarchy is a term used in a book I'm just finishing up - House of Hate by Percy Janes. I truly can't believe how so much of this book resonated with me. But those reflections are for another time or post.

My father's eldest sister, here I'll call her Elizabeth, was a brilliant woman, a pianist of some local renown when her aspirations were smothered by her mother who had an all consuming belief, fostered by the RC church, that a life on the stage was akin to prostitution. E was thrust into service at the local manse which was headed by a widower, the protestant minister of their town. Encouraged by the reverend, Elizabeth resumed her piano playing and tutorials and the gods smiled and the minister and Elizabeth fell in love despite their age-gap of nearly 30 years.

In the Ireland of 1924 this whole affair had to be kept under wraps. Even for the week after they were secretly married in a little village protestant church many miles from their town, E continued going home every night just as before while the minister arranged a transfer to the North of Ireland. She never said goodbye to her family, she just left for work as usual on their day of departure and took the train from her town to Bangor in Co. Down with her beloved.

When the truth of what had happened hit the family, my grandmother immediately held a wake for her daughter and declared her dead to the family and forbade anyone to mention her name in the house again. An order that only ended on her death in 1958. 34 years of bitterness and estrangement. Her husband, my grandfather, never recovered from the loss of his favourite child, my aunt, and died "broken-hearted" seven years later in 1931.

But more was to come. As they sat in their customary 5th pew of the huge RC church of their town the following Sunday after E had fled with her husband, they were assaulted from the pulpit by the roars of the local parish priest who denounced the family for having "harboured a harlot", and my father, the head altar boy, was removed from his position forthwith. My grandfather, to his credit, marched the whole family out of the church before the mass was over and they did not attend services in that particular church ever again but walked 5 miles every Sunday to a small village church.

You can only imagine the ripple effect this had on my family of birth which continues on to this day.

Posted by Wisewebwoman at 6:08 PM