The Dynamics of Long Term Friendship 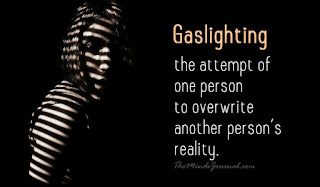 My friend came to me today, deeply troubled.

Her 65 year friendship with her bestie was on the rocks.

Her friend, B, had made weekly plans with her, dinner on the Friday.

S, my friend, called her to confirm on Thursday.

B said, things had changed, now they would meet Saturday instead, offering no explanation.

S called her on Friday to confirm and B responded something more exciting had come up for Saturday so said they'd have to meet some other time.

S called B today to tell her how hurt she was and was immediately gas-lit. I've written about gas-lighting before as some in my own family of origin are experts. I didn't know anything about it until I read an article a few years back and the light bulbs went off. S had never heard of it either but when she went over how B had treated her on the phone:


(1)You're too sensitive
(2)I have a life, you should get one
(3)You're forgetting all I've done for you
(4)This is so trivial.
(5)You should apologise for harassing me.
(There was no apology offered by B, you will note.)


she kept nodding at me. It was familiar territory to her in this friendship.

I discussed a long term friendship I had lost. It all boils down to the respect given and received, doesn't it? How we value each other. There were underlying issues (passive aggression and continual tardiness) in my former friendship but basically, for me, it was that sense of having no value, evidenced by lack of contact - an inherent laziness - and dismissal of efforts made by me to cement and honour what we had.

We need to be seen and heard we both agreed. I suggested she take timeout as I had done, to re-evaluate. To get to the point, perhaps, where they could sit down and see what each needs from the other and how they could prioritize and respect what they have.

A difficult process but if both participated equally it could re-ignite that intimacy of 65 years and forge a new respect and connection.

Maybe I should have been a therapist?

Posted by Wisewebwoman at 9:14 PM