And yay Ireland on the referendum and all who sailed in to cast votes from everywhere around the planet. I haven't been so emotionally swept up in a vote in a long, long time. Remembering all who suffered and died because of the barbaric nature of the Eighth Amendment to the Constitution of Ireland.

In the past week, I banjaxed my left arm from the fingertips to the shoulder. The pain was brutal and I needed a brace. This happens periodically and we can't seem to source the cause. It feels like a repetitive sprain injury but to cover such a vast area? I've checked seating, desk height, etc. But I'm baffled. A few months ago when it happened I went for all sorts of tests and nothing was found. 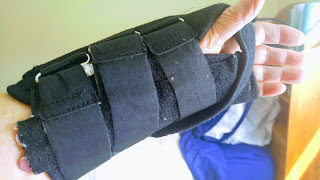 Posted by Wisewebwoman at 12:21 PM