This month's W4W are being hosted by River. Thank you River! You can find her here. Please visit and see what others are doing with the words and maybe join in yourself. It's a lot of fun cranking up the writerly wheels.

Here are the words:

And this is a picture to go with them: 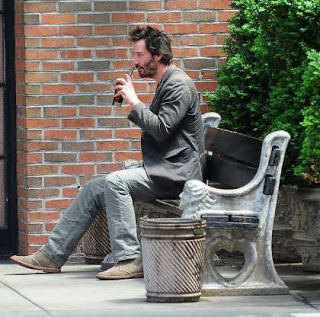 He left the building and discovered his legs couldn't quite hold him up. The day had been so full of promise and expectation and now this crushing disappointment. So he sat down abruptly on the bench outside, throwing his portfolio underneath and fishing a used drink-cup out of the garbage can next to him so he would look like he was busy and not seething and shaking internally. He glanced upwards again at the fourth floor of the publishing house and found the peppermint coloured ornamental blind he had sat next to as the two editors sliced and diced his work.

Maybe the publisher was unfamiliar with his type of manuscript? Surely Gothic-Crime-Romance-Anime was a recognized style? But to be met by derision and a plethora of vaguely hostile narrow-eyed expressions? What was all that about?

His head was spinning. He was grateful to his uncle for setting up the interview with his college friend the publisher. But he hadn't anticipated such mendacious behaviour.

He sighed deeply and collected his portfolio from under the bench.

"Grant? Your name's Grant?" Her voice was low and gentle. Ah, the pretty receptionist from the lobby. He nodded.

She looked around her carefully and then sat down next to him.

"I was the first reader of your work cos I'm training to be an editor," she whispered in a rush, "And I believe you have terrific talent. These guys you met today? They steal a lot of ideas from young writers like you and pass them on to TV studios for production and compensation. But," and here she stopped and handed him a business card, "Here's the contact info for my sister, who's a literary agent. You call her and tell her I sent you. You need to be published and stop this thievery!"


Posted by Wisewebwoman at 6:54 PM