In these troubling times it's good to be reminded there's an amazing and enthusiastic bird watching community in this province. They monitor the bird life zealously and record the "blow-ins" - those birds sent off course in storms and all things avian. The photos are stunning.

One of the more diligent and observant amateurs is Shawn Fitzpatrick. And he posted this on his FB page yesterday and I thought to post it here.Quidi Vidi Lake is right where I live. 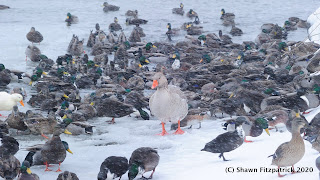 Gary is Gone
Copyright(C) Shawn Fitzpatrick
Quidi Vidi Lake, St. John's NL 20200215
The familiar and resounding call from Gary.... his calling card... Hooooonk...Hoooonk _______ Hoooonk Hoooonk!!! It will sound no more 😞
I took this photo three days ago at the lake in blustery and at times white-out conditions.
I have taken many photos of Gary since he graced our beautiful central city lake with his presence.
During his tenure as self-appointed leader of the waterfowl there, he kept an orderly operation. Sometimes he'd scold the Double-crested cormorants for taking up too much real estate for too long.
He was always polite with human patrons of the lake and particularly gentle with children there with their parents feeding him and the ducky's!
I always talked to him and called him in when I went down to feed the crew at the west end of QVL. Gary would always only take a little, never seeming to want to hog everything. It was as if he sensed that the food had to be shared around as best as it could stretch out. So, he would gently eat right from my hand and then move on back out to the water, keeping an orderly eye on the assembly of his waterfowl family.
Gary was a Graylag Goose. He showed up at the lake after being coaxed along by a couple of bird lovers after being first observed along the roadside of Logy Bay Road a few years ago. He was lured to the Virginia river and onward downstream to where it opened up near the Legion into the lake. The rest is legacy 🙂
I started calling him Gary the Graylag and happily enough, it stuck. I think his name suited him well.
From there, he established himself as a much loved fixture. At times keeping the rowers on the water practicing for the regatta on their game, by policing them.
He was known by many, and photographed plenty.
We are going to miss you Gary, you beautiful, handsome goose! I hope that your end was natural, and painless.

PS When Shawn was asked if he had seen the body, he said he had and it was a natural death.
When asked if he buried it so Garyfans could bring flowers and mementos, he said no. He left it there for the bald headed eagles to feast on in the cycle of wildfowl life.

Posted by Wisewebwoman at 10:11 AM