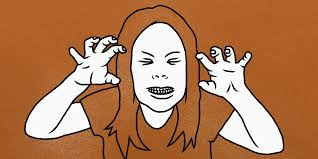 As a woman and girl, having navigated patriarchal capitalism and its handmaiden religion for nearly all of my life I found this nugget today:

In later life I was told that anger was toxic and could really damage me. That my life would be so much better if I could just forgive.And boy did I work hard on that. Owning my part in the RESPONSE to my own abuse and mistreatment. Imagine.

But does forgiveness mean forgetting? How does one forget? I've asked many times is there a magic bullet? Because depression is the polar opposite of anger. If you repress anger, black depression ensues. And you know what? Most people I know are on sedatives, tranquilizers, call them what you will, to treat a "chemical imbalance" in their brains. And if they open up at all about their lives behind them there's a trickling seam of rage underneath, which is quickly shut down. So is chemical treatment of anger an optimum solution? Isn't part of the spirit then quenched?

So anger can be a powerful positive force. And maybe that's why I'm an activist in a world of so very few when you compare total populations. I've channeled my unapologetic anger into advocating for those less fortunate and I speak up when I'm treated badly and I set firm boundaries. I do not use it to hurt or destroy but I will not colour my past with rainbows and unicorns.

As I write my new book (31,000 words and counting) I'm once again the twenty-three-year-old I was, feeling that helpless rage that saw me banished from my native land when I needed it the most and navigating a baffling new country. I feel for her, fifty years ago, forced to bury her short former life, the one that formed and shaped her, and invent a new one. She was so desperately lonely and didn't know how to be angry, carrying it deep inside for decades - an old septic wound waiting to be lanced.

And PS. I am so happy when writing this book, I need to add that. I look forward to it every day. I ignore social media and almost resent phone calls for interrupting me. I am enjoying revisiting the Toronto of long past as it flows past the words on my screen.

Posted by Wisewebwoman at 5:42 PM