Covid and Hospitals and Food. 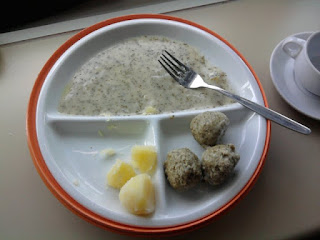 A good man died yesterday. He'd been in the hospital with heart trouble for a few weeks and of course there were no visitors. That must be horribly lonely, you're there, some part of you knows you're not leaving, and the family can't visit. Plus the food is usually pig swill so if you're lying there, all intubated and breathing assisted, what's there to look forward to? A decent meal? No. And in this time of Covid: no flowers or wee fruit baskets or some decent chocolates.

He was always very kind to me, about 5 years older than I, but there was a sympatico between us even though our lives were vastly different. He was a fisher and farmer and raised sheep and suffered from periodic depression which I totally understood. Late in life he went on a plane for the the first time to see an adult child in Alberta. It was a huge event, he was of the school "if we were meant to fly, God would give us wings" but after that he was inspired to get his driver's licence at the ago of 68. He only drive tractors prior to then and cheated the odd time in a car so his test was a cakewalk. He came to all my performances and applauded me vigorously.

I will miss him. He was very generous of spirit and quite shy until you got to know him. I cried for quite a while last night. He did leave footprints on my heart.

Another friend has her 96yo father (who she lives with) in hospital for the past week with pneumonia and can't visit him. It must be so very challenging as he is anxious to eat a home cooked meal and they can't bring it to him. An acquaintance had her 84yo mother fall and break a leg 8 weeks ago and she is also in the hospital with no visitors. I knew her well, played a lot of cards with her and admired her. A very cheerful woman and extremely well put together, always the lipper and bright blue eye shadow and high maintenance hair styles. She described the food being served at the hospital which sounded completely inedible, dried up meatballs and rubbery eggs and soggy margarined toast. She has lost about 20lbs as she won't eat so her daughters are really worried.

I remember the days when hospital food was nutritious, appetizing, and cooked in the actual hospital kitchens. Now it's all outsourced to the industrial "catering" industry who make obscene profits on feeding the sick and dying hospitals and hospices by serving cheap bland swill.

You'd think that hospitals would lead the way in serving local organic well balanced meals to entice the failing appetites of the sick and dying under their care.
Posted by Wisewebwoman at 11:39 AM