It has served me well, I have to keep thinking of the positives rather than the negatives, which is an easy pit to fall into.

I have three more tests coming up. And I want these to be the end of it.

Next up is a colonography next week which involves starvation and massive amounts of ingestion of disgusting materials. A couple of bottles supplied by the hospital itself and a few more from the pharmacy. Fortunately, unlike the others, there will be no invasion of the outlying crevices of my body.

A few days later, there's a new specialist investigating further why I went just about blind in my right eye the day after the colonoscopy. My eye doctor is baffled as the dye tests produced a normal.

And towards the end of the month there is a breath test scheduled which will validate/invalidate my own doctor's speculation that I have a hidden bleeding ulcer causing this constant, chronic and serious anaemia.

My gratitude circles around the assurance that none of the specialists think this is cancer. And I can't praise enough the specialist care this old woman has received in their attempts to discover what  the hell is going on inside me.

And the big one? The universal health care we have here in Canada.  Yes, it could be better, what system is perfect? But the fact that anyone from pauper to millionaire can access it for whatever medical crisis looms without going bankrupt or stressing about payment is one of the enormous benefits of living here.

Special hat tip to my own doctor, who calls regularly, monitors my blood, checks to make sure I attend my various hospital procedures and cheers me up with his humour and good nature. 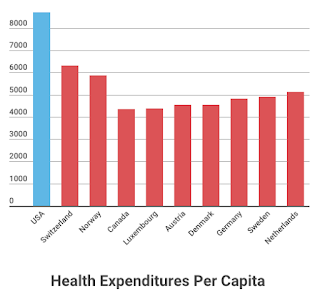 The second chart is life expectancy in all these countries. 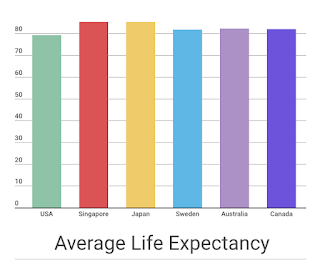 Posted by Wisewebwoman at 10:41 AM