As in sights out of windows. Memorable sights.

One of my first clearest memories was my father lifting me to a window in the second floor flat where we lived in Midleton Co. Cork. I'd say it was 1946 - I did a dive into the web but no further information on this.

Outside the window down below was this: 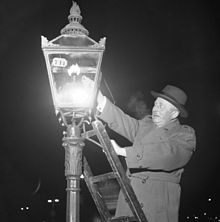 I want you to remember this, said my Dad, this is the last night where the gas lighter will come around and light the street lamps! Tomorrow it will be all automatic. I asked him what automatic meant and he explained that there was a switch in a building, just like our wall switches and when it was pushed, all the lights would come on together and not just one at a time. I was amazed.

Coming up to Christmas in 1955 when I was twelve, my father woke me up one night and told me to look out his bedroom window, where the sky was a deep terrifying red shading to orange. A frightening sight. He said it looked like Cork City was burning up (we lived in the spanking new suburbs of it).  Somebody banged on our door, late, and told him it was the Cork Opera house, where I had performed as a "Tiny Tot" tap dancing, when I was about 6. 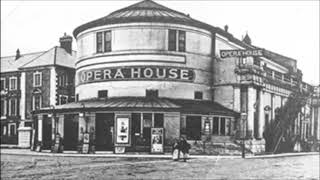 A few days later we went down to see the ruins. 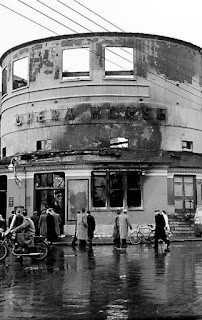 It was heartbreaking. It was built mainly of wood so it went up like a tinder box. I loved that place and enjoyed the pantos and plays that had delighted me.

Sputnik was a big thing in late 1957. There was a fussy great-aunt taking care of us in our home. I was 14 and my mother was in hospital.

She panicked one evening after sunset as the sky was 'cracking'. And again, I looked out my parents' bedroom window and saw a light travelling across the sky. It subsequently turned out to be the Russian satellite, Sputnik 2, with its cargo of the dog Laika. 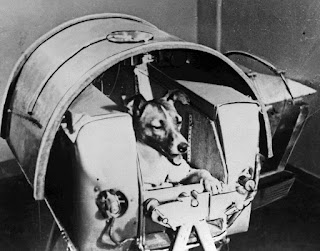 I was terribly upset thinking of the fate of this wee innocent dog, though much was made of the fact that it was a stray mongrel found on the streets of Moscow. As if it didn't deserve to live. it still upsets me to this day.

Can you remember anything memorable from the windows of your life?

Posted by Wisewebwoman at 3:42 PM