Feel free to join in on That Was The Week That Was.

Monday, I had a long chat with a brother who has the same condition(s) I do. He was hospitalized and put on intravenous antibiotics as one of his symptoms was high fever. So infection for him and chronic anaemia for me. But interestingly, no pain for either of us.

Tuesday I had a spyhole installed in my door to avoid the cranks that this snarly hermit tries to avoid at all costs. Started compiling a writing workshop layout for a series of eight workshops I am giving for another anthology. 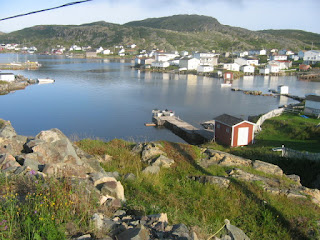 Picture is of Fogo Island, Newfoundland from a few years ago.

Rolled with two cancellations of social plans on Wednesday. I am never bothered by such things as I have masses of plan Bs to amuse myself with.

Thursday not much, several books arrived, two from Ireland and one picked up at my local charming library.

Friday, we had a meeting with local bank to start legitimizing Support Our Seniors, the group I founded. I am always amazed at the emotion showed by young people including my CBC interviewer and now the bank manager, when they learn about the dismal poverty many seniors are in, living way below the poverty line in a "wealthy" country. More awareness is needed. More on that later.

Had to cancel today, Saturday, though not much was planned as I had dizzy spells this morning which discombobulated me. Now thankfully gone. But had a long nap in the afternoon to recover.

Tonight. I was alarmed at not reaching my friend Lana (read about her here) for the past month so contacted her son and she has been put into a luxurious assisted living facility. Something she, like many of us, never wanted to happen.

She had been ill with clots in her right leg and her mental stability had worsened, so he made this decision and caretook her all the way through it. He gave me her number and I was so delighted to hear her - so accepting of her new situation. She is rapturous about the care she is receiving and the incredible meals which she told me about. And how the staff chase her down, laughing, to give her her pills as she walks all over the building to get her exercise. And how she is accepting she is there forever, so to speak. I cried I was so happy and moved. She is younger than I by a few years but one never knows when life can change irrevocably.

This dear friend died during the week. She lived to a great age (94) and this was a study I took of her for a painting by an artist about 6 years ago. He wanted her eyes downcast as she had a "saintly and modest demeanor". He didn't know her obviously, as she could swear and curse with the best of us and had endless talents. 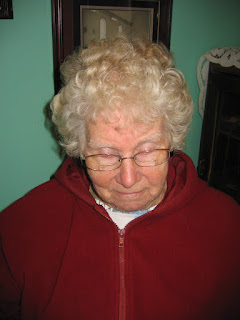 Some lovely conversations with Sherkin Island aficionados, sharing memories and with one planning a trip to Newfoundland. 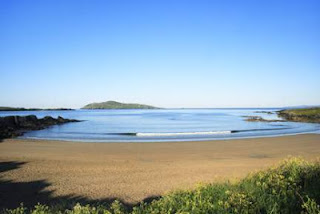 Sherkin - a part of my heart resides there. Always.

Posted by Wisewebwoman at 10:58 PM

Labels: lana, RIP, Support Our Seniors, Write Around the Bay