A Ramble of Thoughts.

We've had one case here of the Omicron. An odd word, I keep spinning it around in various accents but nothing feels right. It sounds like nylon underwear to me. As if it would itch mightily and be tossed in the garbage as "not fit" which is an expression used a lot out here on The Edge. Applied to boats and cars and people in equal measure. The imaginary standard of fitness is never mentioned. Maybe there isn't one. On a divorce: oh he was not fit. On an old boat: she's not fit.

I could write every day here but I think you'd all collapse of chronic boredom. I can write about anything and quickly too.  My thoughts come together on a page but rarely in my mouth. I've had to publicly speak and it's always a challenge so I use cue cards which are helpful.

We have an absolute hoard of my family gathering for this season. Highly unusual as one section is flying in from Costa Rica where they're all basking in their summer right now and will hit our winter wall of snow on arrival and will need to borrow thick pelts of coats and socks and hats and gloves as they don't have any cold clothes. Daughter is coming in from rural and decided to rent a wee AirBnB unit  in the city not far from me before the festivities start at Niece's who has five children between herself and husband.

We keep the whole thing simple with regard to gifts and do the Icelandic tradition of a book exchange which is far more meaningful. If I've had the time I make stuff too as does Daughter, as does Niece.

Organ recital: Health is on a bit of downswing with regard to energy and BP and congestion so seeing the doc this Friday for a once over. No news from vascular surgeon yet. And leg seems to be healing nicely from skin cancer removal.

Life is full of slivers of joy and downers of mortality. I lost another friend last week. It feels like I'm misplacing these dear ones as they keep popping into my head and have to halt myself from emailing or texting them with bits of news. As if there's s wee chance they might respond from the stardust they are dancing in. 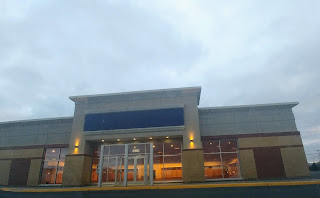 An empty lit up storefront of many in this economic downturn. 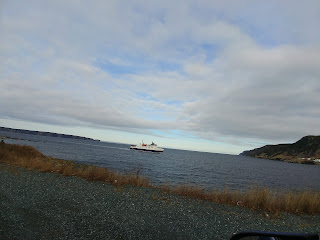 The Bell Island Ferry at a rather weird angle going downhill on the ocean. 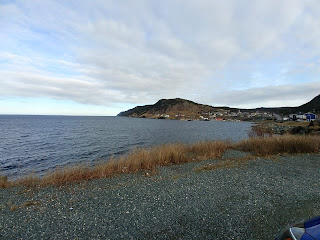 Where the ferry is headed. Portugal Cove South.
For you trivia nuts, Bell Island was attacked by German U-Boats during WW2.