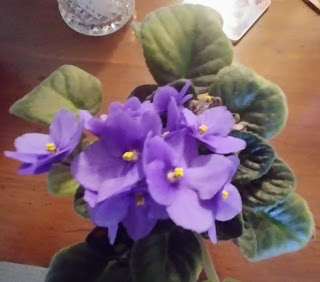 One of my father's phrases in later years was: "I try not to be a nuisance."

By that, he meant he tried not to burden his relatives by dropping in unexpectedly and often. He rationed himself out.

Except when it came to me, living in Canada and with him in Ireland. He got into the habit of visiting me for extended stretches of time every summer. A polite and courteous suggestion of shortening his trips was met with "then it wouldn't be worth my while to come."

So, in actual fact, he became a nuisance to his daughter. I forewent my own vacation time to travel around with him as he wanted to see so much like Washington DC, Ottawa, Canada, the Maritimes, Quebec City, Montreal, etc. He was not an easy man or an easy father. Contentious, rigid in his political views and with his Catholicism emanating from his very pores. Along with inbuilt misogyny. He had once told me when I was about sixteen that "your brains are wasted on a girl."

So our twosomes were fraught with me holding my tongue, incredibly stressful when I look back on our trips. Even worse were the comments from strangers envying the pair of us, "Father and daughter travelling together, oh, I would have given anything to travel with my dad!" I always wanted to reply; "Well, here's mine, have a larf."

Finally one summer, I had a terrible blowup with him in Nova Scotia outside an inn where we were staying where his rudeness to an Australian couple, along with a derision of my chat with a US senator pushed me over the edge. And I thought to myself, "never again am I giving up my time to be insulted and degraded and embarrassed like this." It took many, many years for me to assemble this courage. To actually confront him on his appalling behaviour.

Of course, he had never seen me so enraged as I had rarely stood up to him in the past and never in this white froth of a ten year buildup of repression. No longer would he stay with me for endless weeks.

We remained civil afterwards, and our weekly correspondence continued.  I visited him in Cork, but the most remarkable thing was how he treated me now: with deference and respect.

The last time I saw him we were staying at a brother's place in West Cork. And as we were all saying goodnight, I went over to him and put my arms around him, he looked so small and diminished in a corner with the family milling about all laughing and joking.

"Good night, daddy," I said, not having called him that in a donkey's age, "I love you."

And true to form, he pursed his lips, and turned away in embarrassment.

But I think I caught the hint of a tear before he did so. 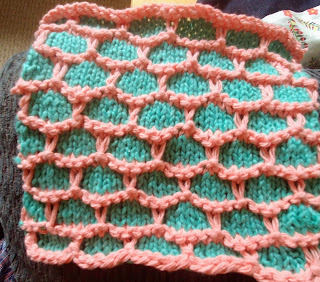 Just finished this on the fly, a dishcloth, I find enormous peace in knitting.

Posted by Wisewebwoman at 11:04 AM