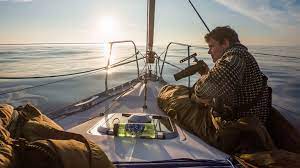 I am continually fascinated by how people's lives, once dead, can be sanitized to the extreme where you wonder whom the obituary is talking about. Or whom the article or book was written about.

A friend dropped off a magazine for me to read as it featured her father, a brave Norwegian sea captain who saved many lives during WW2 and had a full chest-load of heavy beribboned medals to prove it.

She has shared much of her father's story with me. None of it good. For instance he moved to St. John's after the war and married her mother. He forgot to mention that he was also married in Oslo.

He was a man who was into the swinging lifestyle in a major way and her and her three siblings' childhoods were warped by the mad drunken key-swapping parties in their house.

His first wife tracked him down when my friend was around twelve and he was yanked back to Norway to parent the two children he had had there. He never returned to St. John's.

My friend tracked him down when she was twenty-one so she could introduce him to her infant daughter.

He was pleasant and polite, she told me, but very disinterested in her life and baby. She was introduced to wife number one but this woman had no English so she wondered  what lies he told her to account for my friend's presence in their home.

Needless to mention, wife number one is not mentioned in this glorifying article, just the second wife and her four children.

And I know several such immaculate life stories far, far removed from the dark underbelly of truth.

How about you? Know any?

Posted by Wisewebwoman at 7:10 PM