Another Completed Circle Around the Sun Thoughts 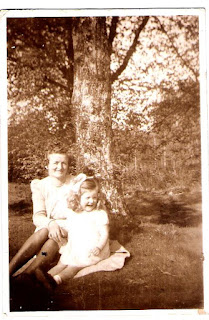 Yes, I'm the happy little cutie with my mother in 1946

I am quite astonished by all the birthday greetings rolling in on me. I suppose hitting the age of 79 is a feat to be applauded. Not that achieving this had anything to do with my healthful and perfect lifestyle. Not by a long shot. As some of you don't quite catch my sarcasm so there's a bit for you. Many of my really healthy friends are dead. Well come to think of it, most of my friends are dead.

Amongst the many messages is one from an old school mate who is a whole 10 days younger than me. she partly writes:

"Speaking of school reminds me of our old school and this bit of information might bring s smile.
One of our newspapers, the Irish Independent, has a Saturday magazine.  This Saturday it had a feature on Centenarians, Four centenarians were interviewed one of whom was Sr Mercedes.. She talked about her early life both before and after she entered  St Marie's of the Isle, but the piece that might interest you was how she became a Science teacher and introduced Science into St. Al's which was unusual for a girls school then.  She never taught me as anything science-y was beyond me.  Anyway I texted Gladys to let her know and she replied as follows"She was thrilled with wisewebwoman and myself when we burned hydrogen in air and got  H20, ie water".   I wonder if you remember that incident.  Gladys also said that your class was the first to study Science in St Als. Glad you didn't burn down the Science building anyway!"

I calculated this was 65 years ago, which is incomprehensible really. I can remember the experiment clearly in our spanking new laboratory. Girls and science were at a great remove from each other then. I feel like a living history book. Along with science and physics our incredible headmistress insisted her "gels" be taught calculus by a male teacher from the boys' school across the river.  (Our school was a picturesque old red brick building in the middle of the river Lee). Higher mathematics were absolutely unheard of for any schoolgirl in Cork city in those days. We were incredibly fortunate.

Equally astonishing to my mind is that a teacher of mine is still alive today.
Posted by Wisewebwoman at 1:56 PM