Fascism is alive and well in Canada! 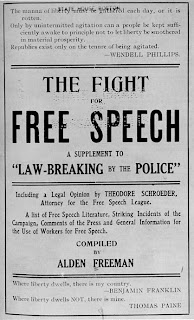 Ezra Levant is the type of extreme neo-con we all love to hate. He publishes a ratty little magazine dedicated to those of his ilk (pro-war, let's bomb Iran into dust, let's cleanse the world of Muslims)called "Western Standard" out of Calgary, Alberta.

You remember those Danish cartoons that caused all the trouble in 2006? Well, Ezra took them to his heart and copied them in his hate-mongering little magazine.

A complaint was lodged in short order by an Imam with the Alberta Human Rights and Citizenship Commission and our Ezra was charged with "advocating hatemongering".

Here's where it all gets very interesting. This complaint was taking seriously, even though Ezra was perfectly within his rights in using the free speech guaranteed him by our constitution, hateful and horrible though that speechifying was. He was hauled up before the commission and was asked pretty scary questions by a snide little bureacrat about the opinions he expressed and why he expressed them with the penalty of being punished by law.

Ezra had a camera rolling, his wife and lawyer present and even though requested by the government to keep the hearing secret exploded it all on YouTube.

I am horrified and I hope you are too.
Posted by Wisewebwoman at 2:16 AM