I had a lovely dinner with R on Tuesday at his insistence. He was pacing the lobby of the restaurant when I arrived and rushed to hug and kiss me.

He was very insistent on a table rather than a booth and then to my astonishment sat beside me. The backstory to this is that when he was with me in NL I had talked of my last great love who had always sat beside me rather than opposite me in restaurants.

He said he had a huge apology to make to me at the outset and that was for the ignoring of my birthday when he was with me. All the way back to TO in the plane he had beaten himself up for this and many times since. I was gracious, of course, and acknowledged the depth of his remorse and also the fact I had forgotten it, which was true.

He could not keep his hands off me and apologised several times, telling me he had missed me so much. He told me had been seeing a woman who had since dropped him (and I was so pleased I had intuited this on the dry spell of e-mailing!) and also that he had an eye on another and didn't know what to do. I queried him on experience in the dating scene prior to his marriage. Just about zero. I said maybe he needed to lighten up and just date several women and not think everything was a huge commitment. This hadn't occurred to him. I'm not surprised at this as I miss the bleeding obvious so many times that I never condemn it in others.

I told him of my gentleman caller and how lovely it was to feel like a romanced woman again. As he was touching me (mainly arm stroking) I realized how much I miss that kind of intimacy, not so much the boinking but the touching. He seems to trigger that in me. I hesitated to tell him this - I've never dealt well with rejection - so didn't and in hindsight I'm glad.

We had a 3 hour dinner and at the end he hugged me many times, told me how much he appreciates me and how he felt so much better having had a chance to talk to me.

I should add he is an only child, always has been, parents now dead so no one in direct family to talk with. I think he sees me as a very loved sister. The women he is attracted to are age appropriate also which pleased me no end and of course makes him look more attractive to me.

But the thing is, I get a little worked up when I'm with him. It could be attraction, it could be a freshly woken kind of lust, or just the need of intimacy.

Oh, and he no longer wears a wedding ring and I did comment on this and he was delighted I noticed.

I keep thinking of that book ~ 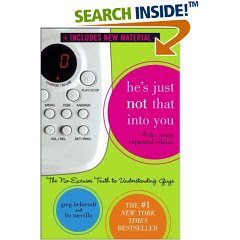 ~ and just letting go of any romantic notions while still being his close friend. Easier said than done.
Posted by Wisewebwoman at 5:58 PM