I've had it up to here with misogyny.

Keith Olbermann, a journalist (hah!) I used to respect, calls for "a man to take Hillary Clinton into a room and only he comes out" on MSNBC.

This main stream talking head is calling for the murder of Hillary Clinton?

I simply do not understand the senseless rage and fury generated by this woman. The demand for her submission to the patriarchy, the humiliation of the T-shirts - "Why didn't OJ Simpson marry Hillary Clinton instead?" - being an example.

This is what evil looks like. And I am not silent. Silence condones such words of horrific intent.

Where is the outcry?

So it would be OK to suggest lynching Obama?

Or suggest, oh, tipping McCain's wheelchair over a steep cliff?

I am beyond disillusioned with the main stream media. 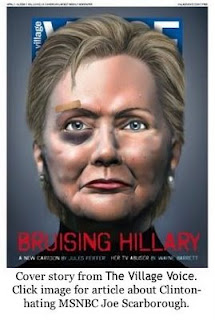 “Our lives begin to end the day we become silent about things that matter.” Martin Luther King.
Posted by Wisewebwoman at 3:32 AM