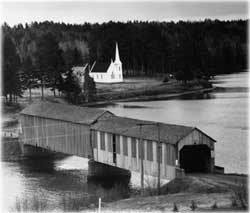 An almost forgotten province in the overall scheme of Canada, New Brunswick is full of forest, so much so that three hours driving through the green solidity of trees upon trees has never failed but to have me pull over to the side of the highway, almost in a coma and doze off, head back, drooling I'm sure, for about half an hour. I nearly made it all the way through today, I'd about fifteen minutes to go but my head started to nod. I scrabbled myself and the car off under a tree's comforting shadow before any harm could be done. The somnolent effect of hundreds of miles of trees has to be witnessed to be believed and I have driven this road close to fifty times in the last thirty years and never managed to make it through in one swoop.

On another note: my dear aunt Frances was buried today and a brother gave me a full report. She wished to be buried in the family plot with her mother, my father and my mother and her sister. However, the family plot is full to capacity and there were a few options, two of which would have upset my aunt. One was to cremate her and bury the ashes in the grave. As she was a Catholic of the very old school this was out of the question. The second was to try and determine if one of the other graves around had a spare apartment. But being buried with strangers would have appalled her.

The third was to build a 'penthouse' (my brother's word, not mine!) above the family plot and ensconce her, queen of all she surveyed. This was the most expensive option but as her will had been very specific regarding her eternal location, it was decided to do just that and honour her. I was very pleased and rather tickled at the idea of her, a very humble woman, rising above all those beneath her. RIP, dearest aunt, from your mouth to your God's ear. Save us from peril and from woe.

PS I wonder does the PH have its own little elevator and fireplace?

PPS Full report in September of the penthouse gravesite.
Posted by Wisewebwoman at 10:32 PM