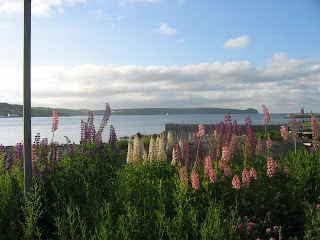 Picture is of Holyrood, NL dressed in lupines taken by me, June of 2006
As we ride through Nova Scotia, I see a subtle change in Ansa, my canine companion. Her head lifts high, her ears follow, her snout finds the airvent of the glove compartment. She has smelled the ocean before I've seen it. We both whoop in glee. Well, hers is more of a tiny yip.
So barely landed late last night here on the Avalon, we decide in the glorious pink sunset of the late afternoon today to head down to one of our favourite spots, the boardwalk at Holyrood. It is built along the site of the old railway line that used to run out here from St. John's, right along the sea coast. What a trip it must have been by steam! One can almost hear the click of the wheels on the track and the faraway train whistle.
And we run into another dog, her favourite kind of all, a big blonde male. This one's a retriever and also a rescue.
It's funny that. How one rescue dog meets up with another rescue dog. And their companions trade stories. And share a spot of emotion.
Jake's owner shared his story first. He was pretty defeated when she acquired him over six months ago. She could see his ribs sticking through his matted spotty fur. His depression was palpable for his head hung low. She began grooming him and feeding him small meals three times a day but otherwise letting him assimilate at his own speed into her life.
A month later she looked up from reading the paper and found Jake had backed himself into the opposite corner of the living room and was on his back legs. Next thing he started to dance, waving his front paws at her and moving his back legs delicately. This went on for five minutes and then he stopped and lay down, snout between his front paws and just gazed at her, his dance of joy over.
Now she looked at him and said, "Jake dance". And he did, delighting both Ansa and myself.
As to Ansa, I have many stories and this is one: she was never fed anything but garbage and what she could scrounge when I got her. Her fur was dull and matted and her eyes remained focussed on the floor also. It took me a while to get her to take dog food. Quite a while. Our routine in the morning now is I let her outside and fix her breakfast. She comes in and heads right for the dog bowls, sniffs them, but does not eat and then no matter where I am in the house she will find me and thank me for the food. I have to say "You're welcome" before she trots off joyfully to demolish her breakfast. I have had a lot of dogs over the years but have never, ever been thanked for the food. It never fails to touch me or for that matter, anyone who witnesses this act of gratitude.
Jake's and Ansa's companions shared a happy tear as we watched our dogs frolic joyfully together on the shore.
And debated on who exactly was rescued here?
Posted by Wisewebwoman at 11:05 PM