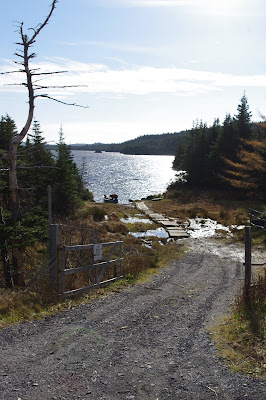 I've always loved the word "boreen" an Irish word, anglicised for every day use in Ireland. It means "little road". Bothair (bo-her) being the Irish for road. Add "een" to anything in Ireland and you have the diminutive. Little Mary=Maureen (maura + een). Little woman=Colleen (caill is woman or old woman + een).

I was having a day of frustrations and minor disappointments yesterday. Nothing earth shaking, just a series of what-else-can-go-wrong-and-then-it-does kind of days.

I took this picture of a boreen heading off down the main road not too far from my house. Outsiders aren't aware of the enormous number of lakes (called ponds) in Newfoundland. We have thousands. Every time you turn a corner there is a seascape or a lakescape. This man was taking in his boat for the season. There is much trouting on our lakes.

Then I forced myself to go to a party. A Ruby (40th) wedding anniversary of dear friends. They'd booked a huge hall. 120 of those present were going to be relatives. The other 10 were close friends. I am honoured to be considered thus.

I'm not a fan of going to big parties or dances or dinners by myself. Visions of my lonesome at a solitary table hauling over a candle and reading a book extracted from my large purse while merriment and enjoyment surround me. Or knitting quietly in a corner pretending I'm one of those mad women out of fiction. Or best of all, happilly at home having refused to go on some flimsy excuse.

Anyway I went. I clung like an infant to my hosts for a while but pried myself off them when I realized they had other guests so went off, got myself a water and barged up to a large table and asked to join them. (Do any of you realize what absolute bravery this takes? No?)

And then one of the women and I at the table get talking. She was a widow of two years and told me she didn't know how she got out of bed every morning. She was a sister of my bride-host. She'd lost her husband of 42 years the year before. But worse than that her only son had committed suicide three years before. He'd come home from up North with a failed relationship under his belt and she had found him in their garage the morning after, an apologetic note to her in his pocket.

And all of a sudden my day took on a new light. And today - which is again full of frustration and disappointment - is just another day. And I had no trouble getting out of bed to partake in it.

My boreen ain't half bad.
Posted by Wisewebwoman at 1:18 PM