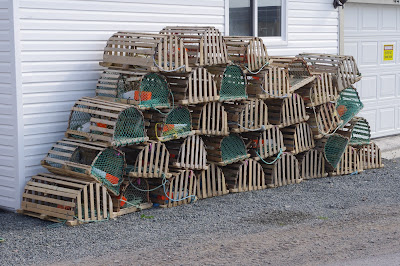 I knew he wanted to speak with me. I'd been taking pictures of the area, it was a stunning day yesterday. I loved the brooding boats both tied up and skating the ocean. I was saddened by this outport, its fishplant falling into the ocean, a once picture-perfect village in a tragedy of disrepair. A house dominating the small harbour showed signs of a bad fire, a nasty change since the last time I was there in the fall.

He was sitting on a little porch of a trim green house watching me. As people with a lot of time on their hands and no inner resources can do - falling into the habit of monitoring the ins and outs of cars and boats and people from their small patch of turf.

I nodded at him and said lovely day and moved on. Away from the harbour, up to the breakwaters. This place can be rough in winter with the full Atlantic's power heaving and devouring all in its path.

I snapped pictures. I take a lot. I always do. There can be a gem among a hundred shots. Or not. And I threaded my way back across the barrens and down into the village again. He had moved. He was now sitting across the road from his deck in the shade of the collapsing fish plant on an old picnic table. He looked ready for action.

I stopped. He was practically frothing with curiosity.

"Haven't seen you around before?" was his opening gambit.

I filled him in on where I came from, when I moved to Canada, when I took the giant leap to live in Newfoundland. Who built the house I inhabited now, a name he approved of. Our tenuous connection. He was happy, he took a while to mull it over. He had something to share over his tea today.

He pointed up to the burnt house. I could sense the story bursting inside him, waiting to be told. I sat down at the picnic table, a silent command putting the dog underneath it in the shade, placing the camera beside me. All ears.

It was December, just before Christmas. He smelled it before he saw it, sitting as he was at his kitchen table reading the Telegram. He thought it was somewhere else as he had electric everything, got rid of the old Enterprise with its constant need for wood and attention. He carried on reading until the smoke drifted in, he thought he'd left a window open so got up off the chair and went out to the hall and found himself engulfed in flames and couldn't reach the door to open it.

"You never know where a doorknob is when you're choking from smoke and blinded from fire."

It felt like an eternity for him to find the melted doorknob and push back the bolt and open the door. By then he was engulfed in flames and had to roll on the ground, screaming in agony.

And then he passed out and woke up in the burn unit of the hospital.

"Six months," he said, "I only just got out of the hospital. Now I'm going to show you my body, well, you know, only the parts I can show a lady."

And he took off his shirt and it was horrifying. I couldn't count the skin grafts on his arms and back and chest. I was shaken. And astonished he was alive to tell the tale.

"Do you know what caused the fire?" I asked.

"Well, the forenzas were out here and investigimated it all and couldn't find the reasons for it in spite of all their fancy 'quipment and best brains in the land. Electrical. It had to be. I don't smoke - though, lard, if you'd seen me on fire I did enough smokin' for a lifetime that evenin'."


In the last week or so, people have been telling me stories like never before. As I was writing this, a retired handsome (seriously good-looking - hurray! I'm not dead yet!) villager pulled up in my driveway, ostensibly to talk about high-speed and radio stations but it only took about five minutes before he'd told me four fascinating stories, including some from his own life.

Posted by Wisewebwoman at 3:30 PM