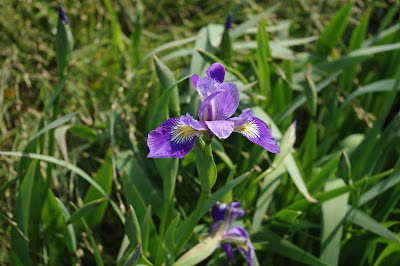 I bring you an iris from my walkabout the other day.

Sometimes old clichés - tried and true wee sayings - keep me going when everything else seems to fail.

Focus on what works and not on what doesn't is the mantra of the moment.

I've been doing that lately. A lot. It staves off depression that keeps banging on my door. Depression over stuff that doesn't work. Family shyte as I term it. Puzzling and powerful and wounding and awful and unfathomable at times.

Leo cleaned out my chimney. Leo whipper-snipped the meadow and around the trees. He was off in his own wee world for a while and I was beginning to think I should get a sheep. Or a goat. Sometimes I think I've got too much land. And then he defugues himself and I come home to a sparkling chimney and outside haircuts on all the grass.

Some new friends and I ploughed the Rennie's River Trail yesterday. It was wonderful. I didn't know the city of St. John's had this magical hidden path running through it. We walked up hill and down dale in this fairy tale setting. Waterfalls, flowers, all kinds of blossoming trees and wildlife.

Daughter calls with good news of full steam ahead in the disposal of her Toronto house and her potential move of her base of operations to here. And Grandgirl's annual flight out here is booked for September (she's a working student now).

And tonight, an old friend, this makes me choke up, thanked me for saving his life three years ago. And meant it. He had severe depression and was suicidal and all I did was listen. And understand. And share some of my own flirtations with death with him. Sometimes we don't know when we're helping people, do we? All that's needed is time. And a willing ear. And compassion. He made my year so far. I had no idea of how close he was as what he didn't tell me that night was about the hose he had stashed in the trunk of his car. And ending it all that very night once I had left.

I need to stay focussed on these positive items at the moment as other stuff, that I can do absolutely nothing about, is trying to send me over the edge.
Posted by Wisewebwoman at 12:25 AM