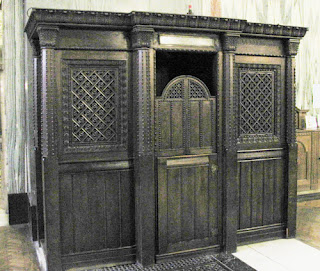 You'd think to yourself there's nothing funny about the confession box. That now nearly obsolete emblem of the Roman Catholic Empire's control on its underlings.

Especially when you read that the confessional was often used for grooming little kids for paedophiliac priests.

In my time, from the age of six onwards, confession was a weekly Saturday afternoon ritual. I, along with reams of other children, had to confess all our ill-doings, our sins, our pratfalls, our disobediences, our impure thoughts, to the Holy Fellah behind the screen of Da Box.

Queues of us there'd be. All watching each other carefully as we emerged, often red-faced and sweaty, sometimes crying rivers of snot, after the "interrogation". Remember- we were all of six years old.

"Bless me Father, for I have sinned."

"What did you do, my child? Leave nothing out. For your Father in heaven can see everything you do. And if you leave anything out, anything at all, He will know and you will not be forgiven and you know what happens then? You will burn in hell for all eternity."

"I stole a penny out of the dish on the sideboard."

"Remember now about hell. How many times?"

"Every day since last Saturday." (gulp)"And I lied to my daddy when he asked me if I made my brother cry."

"Did you have impure thoughts or actions?"

"What's that, Father." He uses an intimidating, deep voice.

You get the picture. In light of today it was downright nasty child intimidation, both corrupting and suggestive. And yes, this all happened.

On finally emerging from the confessional there was a slew of prayers to be said. Often many Our Fathers and Hail Marys to atone for these hanging offences. It was a twisted badge of honour when we were this tiny, to be on your knees for a long time in the pew afterwards. Your friends were awestruck at your confessed naughtiness and begged to be told what you actually did to incur such a punishment by the Holy Father. Invention was huge. I remember telling the boys I had stolen a tricycle when I hadn't and had to say a whole rosary - this at an age where I could barely manage the answer to the first question in the catechism ("Who made the world? - God made the world!"). I was a hero for the week. A dangerous lying criminal to be both feared and admired.

So Grannymar herself suggested that I write a play about the whole experience of growing up while a mini Irish Catholic and I'm taking it on.

I've already written the outline and am actually giggling all the way through this.

Posted by Wisewebwoman at 7:04 PM