A Story to Dine Out On. 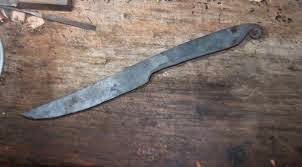 My brother tells this true story. Every time I think of it I burst out laughing. Now, you might have to be Irish to get the humour in it but I'll take my chances as the story truly deserves the light of a bigger audience.

Bro is an engineer and would travel a lot up and down Ireland. You might think being an engineer would be an awful bore of an old job. But no. It had its moments.

He was up in the backside of Mayo one day and was running out of petrol and he found this old shop off the beaten track with a petrol pump outside and pulled in. An oul fellah came out, a dirty, greasy oul fellah and filled up the car.

"Where would I get a bite to eat?" sez Bro, noting it was well past his lunch time and he was starving.

So Bro follows Yer Man into the shop which reflected the condition of Yer Man himself. It hadn't seen a duster or a wipe down since God was an altar boy.

"I'll be fixing yez up so, a good thick sammich," sez Yer Man, hauling out a big round of brown soda bread and slapping it on the filthy counter. Next, he retrieves a huge slab of ham from somewhere and Bro notes it is crawling with bluebottles (big flies). Yer Man then goes into a drawer and selects a rusty, dusty carving knife and with a flourish pulls out a filthy rag from his back pocket and proceeds to wipe down the knife.

It's at this point in the proceedings that he catches the appalled look on Bro's face. Completely misinterpreting the look as approval for how well he's conducting his lunch preparation, he says proudly:

"Arragh I'm a hoor for the hygiene."

Posted by Wisewebwoman at 12:35 AM