Equivalent to "Cat Lady". No, no cats. Not now. And in the past never in extremis. Two was the maximum ever along with two dogs and two birds and two fish. Kids. What can I say. Now no cats. But knitting, yeah.

You see before you a yogurt maker I got for a dollar yonks ago. It was missing two jars, I had to use two jam jars for a while. It never had a cover. But a dollar. Hey.

Then Daughter found 3 jars at a flea market for 50cents each. You'll note yogurt maker is nudging its way to a deluxe model now. No more jelly jars, All jars (and a spare) are now milk white glass. 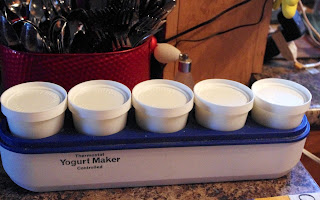 But I got tired of wrapping it in towels while it did its biz, you know?

And I had leftover wool. And knitting in the morning has become a sort of meditation for me after breakfast. I am hoping my BP will improve, as in slide downwards, as I'm getting a bit tired of my weekly dates with my doctor. Not my type.

So tada! behold the yogurt sweater! 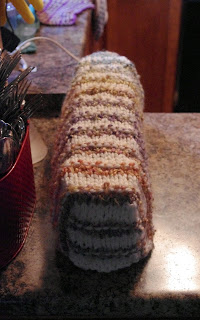 I am hoping Ramana will see this as he makes his own yogurt too and as far as we are concerned we are the only two in the whole universe who do so.
Posted by Wisewebwoman at 8:30 PM