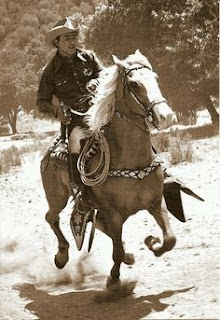 I have this thing. I just wonder if anyone else does it. I'll mishear or misunderstand something and my version becomes my favourite and if you happen to say the word or the phrase I secretly convert it to my chosen meaning.

My first awareness of this came about when my mother was reading out loud from a letter she'd received from my godmother, her sister, who lived in London, England. I would have been about eight.

Mum read that my aunt and her family were having their annual "hols" in Weston-Super-Mare that summer.
I was green with envy. I thought: what an adventure, riding out to the west on great big horses.

"Because we're in Ireland and they're in England!" my mother probably explained.

"But there are lots of big horses here too, we don't have to go to England!"

At this point I was ignored I would think, I was one of those kids who would try the patience of anyone within earshot, always asking question after question.

But the visions in my head of Auntie Norah, Uncle Michael and their two small daughters galloping off to the magical west on their super mares never left me.

Even today, every time I see or hear Weston-Super-Mare I can still picture the four of them, hair flying, laughing joyfully, cantering over hill and dale chasing after Roy Rogers and Trigger - for that was the only west I knew then.

Oh, and happy trails to you!

Posted by Wisewebwoman at 7:17 PM