On Viaducts and Trestle Bridges 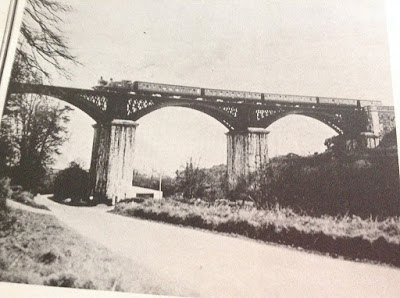 In two books I've read recently railway tracks spanning rivers or gorges feature. I love this in books, when my mind can drift off and I'm back, once more, lost in a memory.

I remember getting my first bike. I was 9 years old. My post office savings account had been stuffed at birth by relatives and grandparents (1st grandchild) and there was enough money there to buy a Raleigh. A rather splendid bike. I was tall for my time so it was a lady's. I don't even know if there were children's bikes and training wheels then.

I learned to ride on my father's ancient bike with my leg stuck under the crossbar. He didn't know, as I'd finish my dinner quickly and take his bike from the side of the house and head off down the road at this odd angle, my bum on one side, the bike on the other. You see, I couldn't reach the pedals from the seat. I'd return it before he finished his post prandial fifth cigarette. He was a mad smoker then. Players and Goldflakes. He was a much calmer man when he smoked but I didn't want to test his serenity by revealing the temporary theft of his precious bike.

I was over the moon with my very own bike. In those days there were no parental restrictions on distance or time. The only injunction was to be home for supper at half five. I went wild on that bike. I rode to Blarney Castle and would lurk underneath where the Blarney Stone was and collect the money falling out of the pockets of the tourists, much of it American.

I had a taxi service. An odd thing about my neighbourhood, it was mainly boys then, very few girls to play with and those few, unfortunately, stuck close to their dollies and little tea parties. The big attraction for us more adventurous 9 year olds was the Chetwynd Viaduct about 2 miles out. The picture above doesn't do it justice. It was magnificent.

I could carry three passengers on my bike and off we'd head to the Viaduct. We'd traverse its length, we'd dare each other to run across it, we'd shove each other around, we'd clamber on the struts and time how long we could hang, we'd flatten pennies on it. There were very few trains but we'd leave the big old pennies on the tracks and collect them later, all flattened out. It fascinated us. Or maybe just me for I'd ridden it a few times on the West Cork Railway.

When I think now of this risky behaviour, I shudder.

"Where did you go today?" my mother would ask when I finally showed up for my supper.

"Nowhere, just around, nowhere really," I'd answer, "But my bike has another flat tire."

"What do you do on that bike? You must be very rough with it. Your daddy is getting fed up with fixing it all the time."


Posted by Wisewebwoman at 7:44 PM