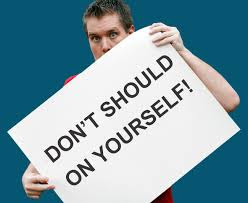 It's an awful word. Should. I've struggled with it for many a year.

As I'm sitting here, all the shoulds are piling up on top of me.

I have a PG** coming for two nights. She's from Switzerland. She's travelling the world. I debated taking her as technically I'm a shut shop until Spring. But then the water tank blew up, needed replacement in breach of the tight budget around here, and I thought (as I always do) don't worry about money so much when money is thrown in your face like this. Bad karma. Take it when it's offered. So I did.

Another friend just died, an expected death but still. She's in Ontario and has lived an extraordinary life. She would never have seen it that way, but the truly great don't. For example she devoted a couple of years of her life to working in a clinic in Africa to help FGM* victims and educate residents as to why this was so barbaric. She will be missed. I heard from her only a week ago.

Another friend has pretty much a terminal form of cancer.

The true cost of aging, as the old man said, your friends drop like flies around you.

The silken thread of memory gets severed, you carry the memories alone.

No, I'm not morose. Philosophical really.

I'm shoulding myself into making up the guest room and tidying the dining room where this long, long table gets so quickly covered in the detritus of my life. Oh yeah, and the bathroom. And the hall where my storm door was fixed and there's more detritus. And the living room and kitchen.....

And a deadline of reading a book for the Book Club (thick, tiny print, 400 pages).

And darkness comes so early, melancholia. A season for dying, truly.

I'm sure I can think of many other shoulds.

It's a bloody useless word.

It should be banned.