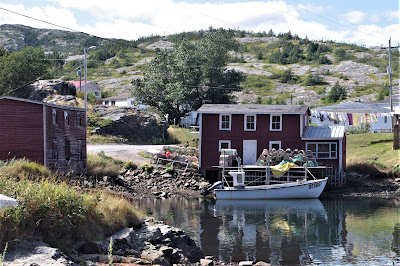 Sheila (alternatively spelled Shelagh and Sheelagh) is a common feminine given name, derived from the Irish name Síle, which is believed to be a Gaelic form of Cecilia.
Word/name: Latin Cecilia, via Gaelic Síle
Related names: Cecilia

And a unique Australian definition (apropos of nothing):
Sheila — Australian slang for "woman", is derived from the Irish girls' name Síle (IPA: [ʃiːlʲə], anglicised Sheila).

I have 3 Sheilas in my life. Which when you think about it is extraordinary. Friends are thin on the ground at my age. And the fact that I moved to Newfoundland when I was 60 (I'm now 75) didn't bode too well, one would think, for new friendships. But these comparatively newish friends are very important to me.

They don't know each other. One is in her fifties, one in her sixties and one is in her seventies.

They are all as different as chalk and cheese.

The oldest Sheila makes me laugh until I am just about sick. We tell each other the most astounding stories from our youth, stuff we've never shared with anyone, ever, and we fall down, howling, thigh slapping, snorting, catching our breath. We share a very highly developed sense of the ridiculous and an art for self-deprecation.

The middle Sheila has been a friend since I moved here. We have traveled a lot together, gone to Ireland together, nurture each other, commiserate with each other. The other night over dinner she said earnestly to me: "You know if anything ever happens to you I'd visit you no matter where you were, right?" And I know she would. She brings me soup and hash and I know she'd feed me no matter what my condition. But it was a lovely thing to say and I will treasure it because sometimes we wonder, right? Who's gonna visit when we are drooling and incontinent and mindless. Well, I have one. Signed up in advance.

Baby Sheila I have known for a while. She was one of those instant friends. It happens so rarely. To me, anyway. Did you ever meet someone and you just know instantly? It's happened to me a few times and unfortunately they are all dead now. This time maybe she has a chance of outliving me. I have fun with her. She has a great understanding of aging, living with her 90+ dad and like me, comes from a dysfunction junction of a family of origin. And she's great at pointing out the assets and not the liabilities of life.

Picture above is one I have as my wallpaper. I was hoping to make it into a card, like I do, but the words weren't coming. What words come to you, if any?

Posted by Wisewebwoman at 10:06 PM