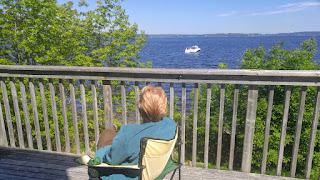 I wrote about Lana a few times, a dear long time friend who has Alzheimer's. It is getting far more difficult now to have conversations with her of any depth or meaning.

I felt an enormous burden after the last one. She told me her planning for retirement was going well and she was of course very fortunate to be doing all of this as she was in her fifties and had loads of time.

I thought it was a slip of the tongue until she mentioned it again later in the conversation, saying that she really felt more alive now that she was in her fifties. I let a lot slide with her but this time I said you're in your seventies. She didn't believe me and went hunting for her driver's licence and read out the date of birth to me January 1946. See, she said, I'm only in my fifties! I let it slide. I let everything slide. She is fighting with her sons over her estate (a significant one - she was a woman of extraordinary intelligence and financial acumen) and hanging up phones on them and confused as to how she has structured it and can't find copies of it anywhere. She is leaning heavily on me to tell her what to do.

I ran all this by another long term friend (he's not a friend of hers) and he advised me to back away as this was taking a huge emotional toll on me and anything I said to her would be forgotten in a minute, even though I tell her to take notes. Unless I'm into monologues. So yes, I have to let her go.

He also told me his liver cancer is back, half was removed over a year ago. This does not look good.

Sometimes, I don't think things such as these affect me mentally and emotional and physically. I have this denial mechanism that kicks in and I'm exhausted and dispirited and lackadaisical and sad and confused. Chin up, chest out, people are a lot worse off than you, etc. That's the inner voice.

But old age is a time of extraordinary loneliness (versus solitude, a different thing entirely). I'm aware that showing real feelings is dangerous behaviour. The BORE effect. I tend to lock down and pretend. Maybe this is a living alone protective strategy. But, observing those around me at The Lodge, I realise they are all in lock down too. Reduced to small talk and trivia, rather than the real and actual challenges of living so long as those loved and cherished disappear forever into the void.

And oh yeah, Joanna, my elderly cleaning lady is really losing it. Most notably, she forgot my apartment number even though she's been coming here since I moved in nearly 3 years ago. My name is on the board downstairs along with my apartment number. I found that really alarming.

Not to mention winding up our days in this Covid-19 scene. Something never predicted. We have one new case here after 43 days of none. Like a final domino to me in my downer state. 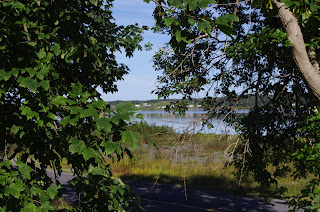 A view from the deck of my old house taken a few years ago. Oddly, it seems like yesterday at times. I loved that place.
Posted by Wisewebwoman at 5:23 PM