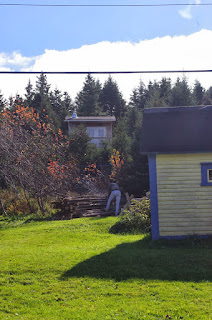 Leo at work, way back.

There were several messages from his family.

Leo is in hospital, he'd going into palliative care today, please call him, he's talking about you and loves you and wants to hear your voice.

Leo worked for me for many, many years when I had the house around the bay.

I wrote about him a few times.

You can read the pieces here

So I braced myself and after many attempts reached him.

And he sounded frightened and sad and mixed up. But knew me right away. He knew I would call, he told his siblings.

He doesn't know he's dying. The lad (as we call the Big C in Ireland) is everywhere. His whole body. He knows he'll be in hospital until after Christmas. He says I've never been sick a day in my life. I never take an aspirin even. But you said the smoking would get me. Has it got me?

We were very good to each other, Leo. You were a very good friend and worker.

When I get out of here we'll see each other, won't we?

Of course, I say.

For there is nothing left to say.

I wrote this many years ago.

For Leo and all the Leos of the WorldSometimes my heart breaks, just a little bit.And I don’t know why that is or where that comes from.I see him mowing and chopping and plantingAnd stacking and reaping, picking up sticks from my lawnGathering the golden brown leaves of the tired summer treesMaking straight lines along the wondrous green of the grassLike himself, for he walks so straight, like a military man.He makes me giggle sometimes over silly stuff.He gathers up things from the shore that I might like.Old keys, glass bottles, multi-coloured feathers, odd bits of driftwood,And presents them to me like the priceless gifts that they are.He’s very clear and direct. He knows his likes and dislikes.And announces them without apology or humility.He knows he had a bad accident when just a lad.That affected his brain forever and ever.A wondrous twelve year old in the body of a fifty-eight year old.He tells me he likes me very muchAnd that he loves working for meAs I treat him fair and don’t torment him like others do.He treats my welfare like his own, fixing things,Working things out patiently as I watch, learning his patience.I treat his welfare like my own, feeling his hurts,Watching out for others’ thoughtless cruelties.

Posted by Wisewebwoman at 7:59 PM